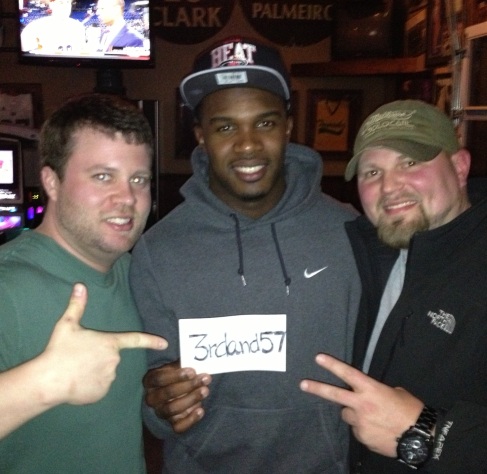 It always fun rooting for home grown Mississippians that played at your school who are now in the NFL. Its even more fun when these guys come back around and don’t forget about the little guys. This is definitely the case with Clarksdale native and former MSU star Charles Mitchell. He is currently enjoying a little time off after his first year with the Atlanta Falcons. Even though he has moved on to the big time, Mitchell remains true maroon to the core. You can follow him on twitter @cmitch412 . I encourage fans to occasionally drop our former guys a note on twitter and let them know we are still rooting for them.

In an exclusive interview, Mitchell had this to say about 3rdAnd57.com

“Whenever I start my day I always go check what my guy BeastMan has loaded up on 3rdAnd57. I’ve done tons of interviews and there is no doubt he is the most talented up-and-coming writer around. His stories are all great reads and many other guys in our locker room read him as well. Believe it or not, Dexter McCluster is a big fan of his too. After my rookie contract expires and I sign my first big deal I’m gonna sit down with BeastMan and pour a whole bunch of money into his site so he can take over the whole internet.”

Just kidding. I made all that up. He thought it was a funny idea. In all honesty, Charles is a great dude and I wish him a long prosperous NFL career. This Dirty Bird is for you CMitch.