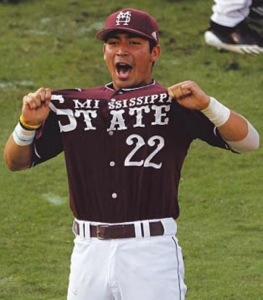 For the first time since 2003 and the 12th time in school history, MSU gets to host a regional at famed Dudy Noble Park. It’s been a long drought that has frustrated many Bulldog fans but Coach John Cohen’s team was able to battle through a brutal conference slate and earn the hosting nod. MSU owns all 10 of the top 10 attendances in college baseball so I’d expect record crowds in Starkville. Here’s the NCAA’s release which also details the pairings and remaining selections:

The 16 regional sites, with host institutions and records (through May 26) are as follows:

Each regional field features four teams, playing in a double-elimination format. All 16 regionals are scheduled to be conducted May 31 through June 3.

Two institutions are hosting for the 20th time or more as Florida State leads the list of schools with 30 and LSU with 21. South Carolina is hosting for the 15th time. Mississippi State (12th) and Cal State Fullerton (11th) are the only other institutions to host 10 or more times since the NCAA went to the regional format in 1975.

The ACC leads the way with five hosts, the SEC has four, and the Pac-12 has three. The Big East, Big 12, Big Ten and Big West each have one school hosting.

The remaining at-large teams, top-eight national seeds, first-round regional pairings and site assignments will be announced at noon ET Monday. The one-hour program will be shown live on ESPNU. The committee will set the entire 64-team bracket through both the super regionals and the first round of the College World Series, and will not reseed the field after play begins.

Selection of the eight super regional hosts will be announced June 3 at approximately 11 p.m. ET.

There are 30 Division I conferences which will receive an automatic berth in the field of 64, along with 34 at-large selections. The 67th College World Series begins play June 15 at TD Ameritrade Park Omaha in Omaha, Neb.