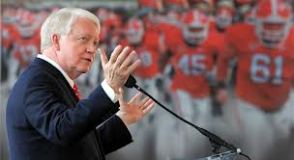 The most talked about recruiting battle after National Signing Day has been that of Laremy Tunsil of Lake City, Florida. The behemoth tackle has coaches drooling over his projection to be the next Michael Oher at Ole Miss.  His recruitment was a strange one.  He was long thought to be headed to Georgia and had a change of mind at the end that has fueled speculation and a ton of anger from UGA fans and possibly even their administration. Does the current news of Georgia president Michael Adams stepping down play into this?

Adams plans to step down after 16 years at the helm of the state’s flagship university. Adams did a great job growing UGA and its enrollment nearly 6 times of its total when he started. I’m sure you are wondering why this has anything to do with Laremy Tunsil. It was announced that Adams is 1 of 8 new members on the NCAA infraction committee. In Craig Powers article on SBnation he said, “The NCAA says the move is to allow the committee to handle more cases and process more efficiently.” Powers went on to add, “Many are likely hoping this will be a step towards a speedier and more consistent process in the future.”

This development adds a very interesting twist to rumors that Tunsil’s recruitment was not on the up and up and UGA has filed complaints against Ole Miss. At this point nothing has been proven and a lot of the rumors are speculation but there has been plenty of wind to fan the flames. Tunsil’s high school head coach Brian Allen made headlines when he was quoted in an interview with ESPN’s Mark Schlabach.

“Once you start getting a lot of people with their hands in the cookie jar, it’s hard for the kid to make a good decision,” Allen said. “A lot of the parents have no clue with what’s going on with football and recruiting. They’ve never had a kid who had a chance to get a football scholarship. They go to anybody with an opinion, whether it’s Joe Blow, Joe the Mechanic or Joe Public. They get involved in situations that can get the kids in trouble or a school in trouble at the end.”

Allen’s comments set of shock waves in the south due to the boldness of the statements and who they were allegedly aimed at. Another instance that drew the ire of UGA fans was the weekend of Tunsil’s visit to Ole Miss, January 25th-27th. Ole Miss had perhaps the biggest official weekend in school history with most of the top talent in America in Oxford at the same time. There were reports of huge parties on the square in Oxford and many of the prospects were keeping us informed via twitter. Once again, social media raised more eyebrows.

That recruiting weekend everyone witnessed many tweets and pictures from current Ole Miss players like Denzel Nkemdiche. We also saw much of the same from prospects like Laquon Treadwell and Robert Nkenmdiche. There were also pictures of all the players on stage at The Library (a popular bar) posted by Clarion Ledger employee and Ole Miss alumni Alex McDaniel. The strange thing is that nearly all these tweets and pictures have vanished. It seems as if all the players, prospects, and some media that were in attendance deleted these things from their accounts. Why would they do that?

To be completely honest, those tweet deletions may not mean anything improper happened. They may not mean much of anything. Even with the insistences by Ole Miss AD Ross Bjork and Hugh Freeze in recent interviews that nothing improper of substance has happened, it is apparent that Ole Miss Compliance has been working feverishly.  That said, it was another instance where UGA fans took the opportunity to perceive it as something to get upset about.  No one instance alone is enough to infer anything but the repeated smoke from multiple directions could mean that UGA fans are putting the alleged pieces together and assuming improper behavior.

Let’s look at this piece by piece. Tunsil’s high school coach gives a damning quote to ESPN regarding improper benefits in his recruitment. Nearly all accounts of the official visit weekend that Tunsil attended has been deleted  from social media.  Rumors are everywhere that UGA has filed a formal complaint or “turned in” Ole Miss. I received an email from an Ole Miss AD nitpicking about a post to my new blog that at the least shows they are in hyper defense mode and extra chippy right now. Now add the bombshell that the UGA president, Michael Adams, who was sitting during these alleged transgressions, is transitioning to the NCAA infractions committee “to allow the committee to handle more cases and process more efficiently”. That could mean that UGA could bypass Slive and the SEC rules that prevent member institutions from turning one another in. I will end this saying I do not know if anything happened or was reported regarding the recruitment of Laremy Tunsil. What I do know is that if anything did happen the worst case scenario just happened for Ole Miss.

One thought on “Is UGA Posturing at Ole Miss?”